Which Came First? The Fish or The Eggs?

Happy anniversary! Well, almost anniversary. June 27 is the actual date. Anniversary of what you may ask? It's the anniversary of my last post. I hope this post is worth the wait. I've been inspired to write after reading posts from Jim and Barb (JimandBarb'sRVAdventure) and Dino and Lisa (MNdrifters). Building houses in the middle of a South Dakota summer snow storm! Going undercover, changing your name, buying a 2nd RV and then leaving the country! These guys are nuts. My kind of nuts. I like 'em! And I bet you will too.
We had a great time at Sullys Hill National Wildlife Preserve last summer. We left there September 1 headed to Middlebury, Indiana to attend Entegra University. Since University didn't start until October 8 we had some spare time, so we decided to stop in Michigan and visit with Jim & Debbie Britt, our friends from Florida who were in their 3rd year of full-timing. After Michigan we drove on to Rochester, New York to visit with Joan's childhood friend Susan and her husband Don. After a few days visiting, sightseeing and playing golf I asked permission to fly to Vegas and play in the Senior Softball Worlds Tournament, to which Joan graciously agreed. I flew, I played, I had a great time.
Upon my return to NY we headed to University where we spent 4 days learning all about our Entegra motorhome. You would think that after living in our Monaco motorhome for 6 years and the Entegra for 10 months  we would know 'what we needed to know' about the new-to-us Entegra. Well not so my friends. There are numerous tasks required of someone when using a motorhome that have an impact on the long term health and viability of the coach itself. Thanks to the information shared during University we learned several methods and procedures that would prevent damage to our coach and its systems as well as improve our experience living and traveling in our coach. And we made some new friends to boot! There were 7 couples in our class and we have stayed in touch with 2 of them; Mike & Robin who we plan on working with in Reno this fall and Lake Mead next January; and Bill & Heidi who we've already met up with once since University and who we'll be seeing in a few days here in Entiat.
We 'reserved' this workamping job at Entiat Fish Hatchery in 2017. Our friends Ginny & Don were the 1st volunteer workampers here several years ago and based on their description of the area and volunteer opportunity we knew we wanted to try it ourselves. And so far we have not been disappointed. It's our 1st time workamping in Washington state and 1st time at a fish hatchery. We are just 6 miles up the Entiat River from the Columbia River. Wenatchee, 16 miles south of Entiat is considered the Apple Capital of the World. Besides apples they also grow peaches, cherries, pears and nectarines.

We've already taken a couple of scenic motorcycle rides along the Columbia River and taken the jeep out for several back woods rides through the nearby national forests and mountains as well as a couple of scenic loops between here and the Pacific coast.

We've driven the Cascade Loop and visited Fort Casey and the Tulip Festival on the Washington coast. Lots of stuff to do in this area, I hope we have time for it all!

Joan and I are working maintenance at the hatchery. We work 3 days a week, Friday-Sunday. We've done some landscaping, pressure washing  and painting as well as assisting with some community events such as Entiat National Hatchery's Outdoor Skills (4th - 7th graders  fishing, archery and wetland activities) and Winthrop National Hatchery's Kid's Fishing Day. One of our primary job responsibilities is the weekend care of the 420,000 summer Chinook salmon that are spawned, raised and released onsite here at the hatchery each year.


And that brings us to the Question of the Day! Which came first, The fish or the egg?

The Entiat hatchery was established and began operations in 1941. Fish raised in the hatchery are released each April into the Entiat River. From there the salmon enter the Columbia River and begin a 500 mile trip to the Pacific ocean. Along the way they have to navigate through 8 dams. Once to the Pacific they remain there on average 4-6 years before returning to their spawning grounds. Of the 420,000 salmon released approximately 4,000 or 1% successfully return. Salmon begin arriving at the hatchery as early as June and July. Returning salmon return to the hatchery up the Columbia, over the dams, into the Entiat and enter a fish ladder directly into a holding raceway at the hatchery. They are kept in the raceways until October when the fish are ready to spawn.

Each female salmon lays between 4000-4500 eggs. The eggs from 1 female are fertilized with milt (sperm) from 2 male salmon. This is done manually to increase chances for a successful fertilization.


All of the eggs from a single female are then placed into an individual nursery tray; and then into racks where they are immersed in flowing 40 degree water. About 3 months after they are fertilized the eggs hatch and the resulting fry (small fish) begin to feed off (absorb) their egg sack. It's not until 6 months after fertilization before the egg sack is completely absorbed and the fry's digestive track is developed.

At this point the fry need to be fed daily, so they are moved outdoors into the raceways where they will mature for another  11 months. A special pump with an attachment much like a giant vacuum cleaner is brought in...

...and the fry are moved out of their trays into a small indoor raceway...

and then pumped into 6 larger outdoor raceways. Initially each raceway holds 70,000 fish. 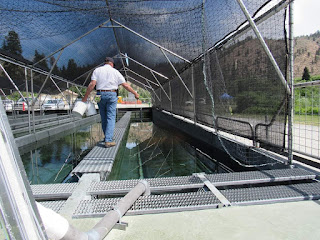 And this is where we come in......As fry the fish are fed 7-8 times a day. They get @ 2% of their body weight in food each day. On weekends we are the wait staff! Each morning we weight the food and then begin a schedule of feedings, each feeding at least an hour apart. Usually around mid day we delay a feeding so we can clean each raceway. Yep, all that food turns into you know what. Ever had a pool? Ever had to clean it? We have what very much looks like a pool vacuum that we use to clean each raceway....every day......all 6 of them (for now).....in July as the fish grow they are moved into 18 raceways! And then later they're moved into 30! And 'Oh Yeah' go very slow.......because baby fish are really stupid......don't  suck them up with the vacuum. And 'Oh Yeah'...all this feeding and cleaning takes place on a narrow walkway between each raceway....don't fall in!

The fish remain in the outdoor raceways for about 10-11 months when they'll be large enough to survive on their own. About 18 months after fertilization the salmon will be released back into the Entiat River. The special pump is brought in and the fish are pumped from the raceways into the river where they will travel to the Pacific, hopefully returning to Entiat in 4-5 years. 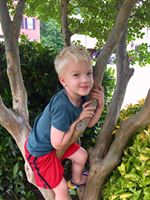 Shout out to my grandson Greyson who just turned 3! 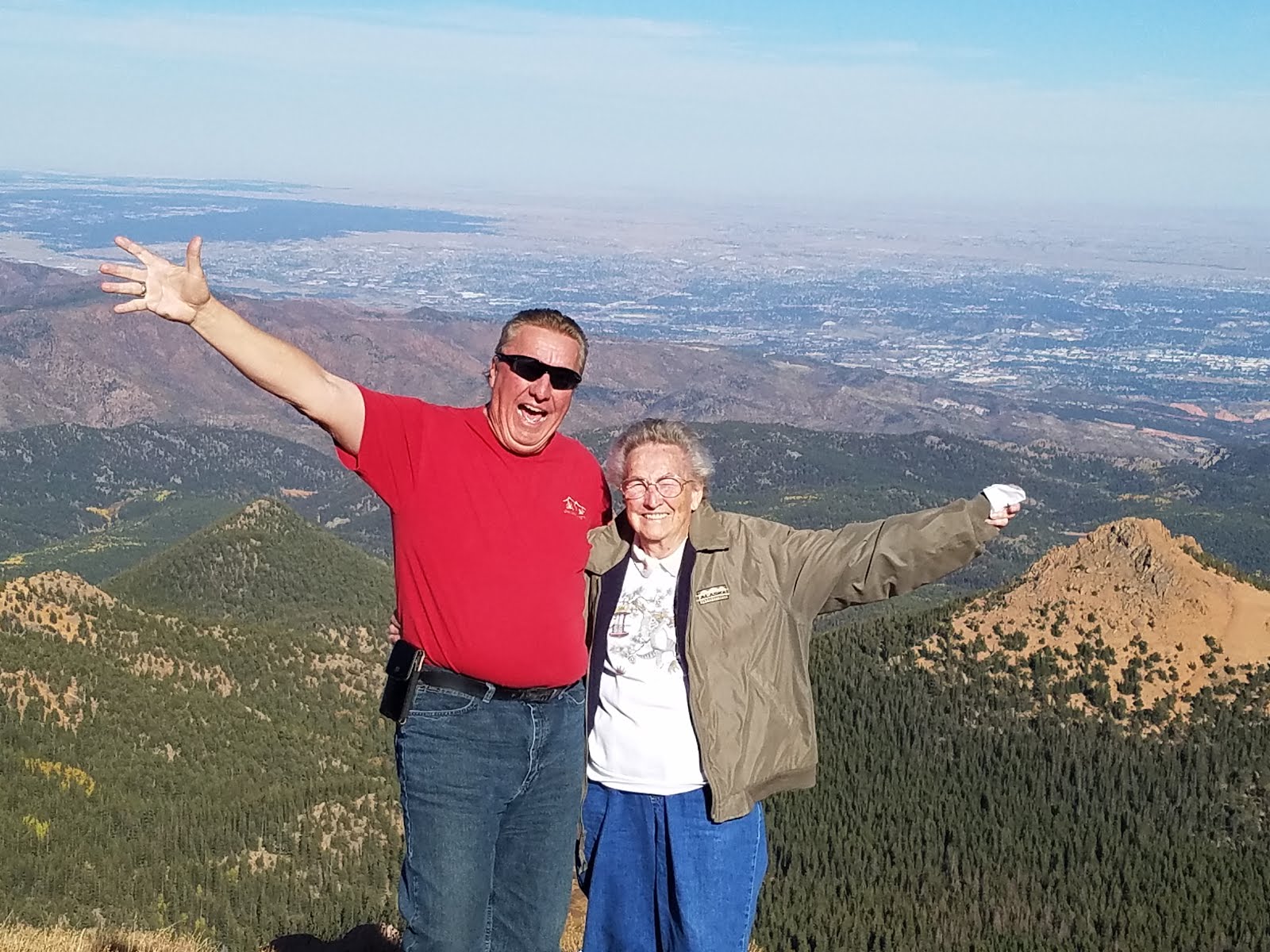 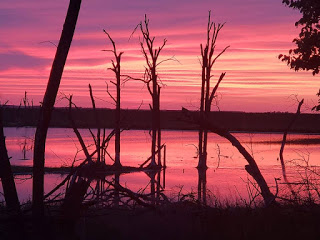